A blind contestant reaches the semi-finals of an international competition in Saudi Arabia, dedicated to the most beautiful voices in reciting the Holy Quran 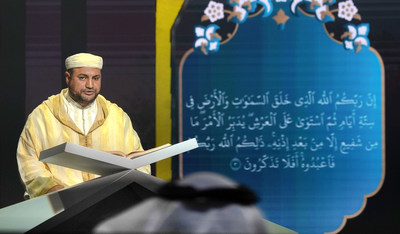 RIYADH, Saudi Arabia, April 11, 2022 /PRNewswire/ — A blind contestant starred in an international competition in Saudi Arabia, dedicated to reciting the Holy Quran and delivering adhan (the Islamic call to prayer) based on voice only, without the accompaniment of any musical instruments. He reached the semi-finals, surpassing more than 40,000 applicants from 80 countries around the world, by demonstrating to the jury his ability to apply the provisions of the vocal performance, taking into account the use of sound pitches in their appropriate places.

The prize money for the competition is estimated at $ 3.2 million, and it is the largest of its kind in the history of talent competitions of this kind around the world, especially in the religious aspect. The first-place winner in reciting the Holy Quran receives $1.3 million, while the first-place winner in delivering the call to prayer receives $533,000. The remaining prize money is divided among six other contestants.

The contestant Younes Gharbi, who traveled from Morocco to Riyadh, the capital of Saudi Arabia, confirmed that he spent all his life and teenage years memorizing the Holy Quran through listening and repetition until he memorized it and has become a strong competitor in the Quranic competitions.

The competition, which is supervised by the entertainment authority in Saudi Arabia, is broadcast in the Scent of Speech (Otr Elkalam) show on the official Saudi television during Ramadan. The competition witnessed many qualifiers and stages until the number of finalists reached 36 candidates to win the competition prize.