ARENA OF VALOR HOSTING THE BIGGEST OFFLINE TOURNAMENT IN BANGLADESH WITH A BDT 2,500,000 PRIZE POOL 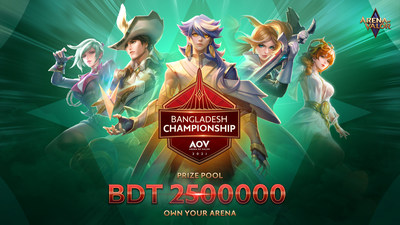 128 teams participate from three cities in Bangladesh and an online qualifier to claim supremacy within the South Asia region!

DHAKA, CHITTAGONG and KHULNA, Bangladesh, Dec. 15, 2021 /PRNewswire/ — Arena of Valor is excited to announce the highly-anticipated first-of-its-kind and biggest Esports tournament in Bangladesh– the Arena of Valor Bangladesh Championship. The event is set to take place on 16th December, 2021 until January 22nd, 2022, with teams from Dhaka, Chittagong, and Khulna, competing head-to-head for the prize pool of BDT 2,500,000. The tournament will kick off with 128 teams, with 32 teams from each region competing online. The top 2 squads from each bracket will battle it out head-to-head to get a chance to move onto the Grand Finals in mid-January.

Arena of Valor is an epic 5v5 multiplayer online battle arena (MOBA) game, similar to DOTA 2 or League of Legends. It has multiple gameplay modes including 5v5, 3v3, 1v1, and a unique “Hook Wars’ mode that will challenge players’ skills and prove their hero as a true champion. The game has a growing number of legendary heroes from brand collaborations with DC Comics, Sword Art Online, Ultraman and Bleach, with more added in the future. Compared to traditional MOBA games played on PC, Arena of Valor is available on mobile, making it convenient for players to battle on the go and team up with friends, guild buddies or players from all around the world in an instant.

As part of the activations around the competition, popular content creators will be promoting the tournament, including Tanvir H. Tushar, also known as Kingopoly, a Bangladeshi YouTuber and social media personality known for his comedic videos and Apollo Gaming, a well-known gaming streamer with over 160K subscribers on YouTube.

“I’m thrilled that a tournament is being hosted in Bangladesh for the first time ever, and I’ll be rooting for teams in my hometown, Dhaka! I can’t wait to see the best-of-the-best squads going up against each other and see what each team has to offer,” said Tanvir, Kingopoly.

“There are so many different heroes that you can choose from to build up your team. I’m excited to see teams conquer the battlefield and give it their best shot to make it to the Grand Finals,” said Apollo Gaming.

MOBA fans can also look out for their favourite DOTA 2 and League of Legends content creators who will be joining the tournament, including Mr. Triple R, Itz Kabo, Gaming with Zahid, and many more.

The tournament is divided into 2 phases: Offline/Online Qualifiers and Grand Finals. The 128 teams will play in City and Online Qualifiers from 25th December until 17th January and the top 8 squads will play the Grand Finals on 21st January. The Grand Finals will have a total of 3 matches played in one day. Points for the leaderboard will be plotted using the standard point distribution. The winner will take home the prize money of BDT 2,500,000.

All matches will be streamed live from 25th December, 2021 until 22nd January, 2022 – Tune in and check the tournament schedule at AOVEsportsBD.com! You can also log onto the official Arena of Valor channels on YouTube, Instagram and Facebook to watch the matches live!

ABOUT ARENA OF VALOR

Arena of Valor is an epic 5v5 multiplayer online battle arena (MOBA) game that has been released in more than 30 countries and has more than 10M Daily Active Users! The game is modified & tuned for the Bangladesh audience to have the best experience in the MOBA category, with 96.75MB package size and game servers placed in Dhaka, Bangladesh. Players compete in multiple game modes including standard or ranked matches with an average of 12-18 minutes. Traverse a classic three-lane arena filled with nooks and crannies between towers, watch out for enemies lurking in the brush and uncover secrets that await in the jungle. Carve through jungles, lanes, and towers, draw first blood and destroy the enemy Core. Intuitive controls specifically designed for mobile will have players racking up kills with ease and level up in no time! 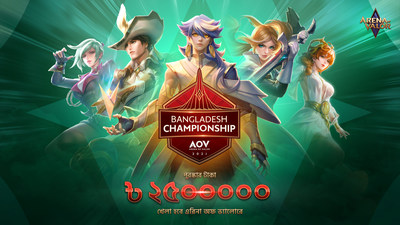 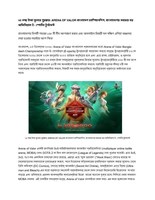 Brij Hotels has Added Brij Gaj Kesri Bikaner to its Portfolio The Stunning Boutique Hotel, is Set to Open its Doors in October 2022