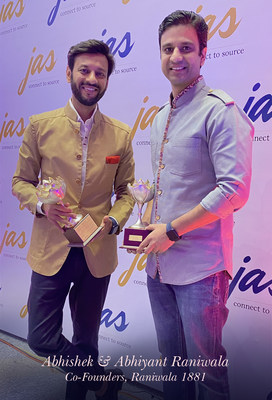 JAIPUR, India, May 2, 2022 /PRNewswire/ — Raniwala 1881, based in the heart of the pink city – Jaipur is the connoisseur of the bridal jewellery of Rajasthan. The brand is known for infusing imagination and creativity in every single piece that it curates while remaining strongly rooted in its history and heritage. It takes long dedicated hours of rigorous handcrafting an original jewellery piece, which makes it a one-of-a-kind and gives a sense of couture finesse.

“We believe in the vision of preserving our craft and culture through a modern lens which radiates luxury and is built on authenticity,” said Abhishek Raniwala, Co-founder & Creative Director, Raniwala 1881.

“Narrating the rich story of India’s heritage and its traditions is a contribution to our culture. We try to preserve the heritage of jadau craft but with a twist, by introducing various design languages,” said Abhiyant Raniwala, Co-Founder, Raniwala 1881.

Raniwala 1881 has always believed in its craft and talent, and a testament to its brilliant craftsmanship is the recognition it has received from the industry that the brand is extremely grateful for. Raniwala 1881 is delighted to announce that it has received immense love and acknowledgment for its jewellery, craft, and vision and has been recognized by JAS’s Jewellery Eminence Awards.

Raniwala 1881 takes pride in its polki-diamond jewellery and has been awarded for its work and vision in the category of Polki Necklace of the Year by JAS’s Jewellery Eminence Awards 2022. Beauty persists in the boldness of polki diamonds engraved in solid gold with tourmalines against the softness of Pearls and Zambian Emeralds. Far-sized polkis bring out the magnificent beauty in this set and makes it truly regal.

Following this award, a magnificent piece made with intricate motifs of elephants and a regal palette of Zambian emeralds and pearls – A long ranihaar (necklace) crafted meticulously to reflect the rich heritage of Rajasthani culture is awarded in the category of Heritage Necklace of the Year by JAS’s Jewellery Eminence Awards 2022. The exquisite piece sets a statement for the modern Millenials who are rooted in their culture.

The brand’s story and design philosophy are heavily influenced from the rich culture and all it has to offer. The brand is extremely grateful for all the love its craft has received and it only fuels its passion more to create outstanding designs for the community.

Raniwala 1881’s illustrious history began with Rai Bahadur Champalal of Beawar, the great-great-grandfather of Abhishek and Abhiyant Raniwala – the current generation behind the brand. Bestowed the title of ‘Rai Bahadur’ by the then British government, Champalal was a connoisseur of gems and stones and known as ‘Raniwala’ in the 19th century.

Specialists in jadau jewellery, the Raniwala family continues to create award-winning pieces with the finest gemstones in traditional, artisanal techniques. Since several years, Raniwala 1881 remains the leading name behind most jadau and polki collections, endorsed by India’s leading jewellers. Having successfully carved a niche within the jewellery trade business, Raniwala 1881 will now directly cater to its bespoke clientele with collections ranging from delicate, everyday jadau to traditional bridal-wear through its atelier in Jaipur.