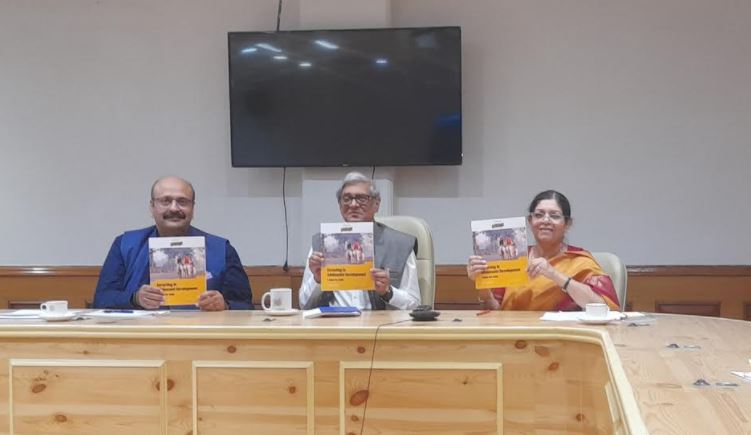 On 15 November, Bibek Debroy, the Chairman of the Prime Minister’s Economic Advisory Council, released a study commissioned by the Population Foundation of India, a national NGO founded fifty years ago by the industrialist JRD Tata. The study was conducted by the Institute for Competitiveness, a research organization. The report examines current interventions in key aspects of adolescent development in India – including physical and mental health, education, prevention of early marriage and assesses the costs and benefits that will accrue from future investments in this critical population group.

On 15 November 2021, Poonam Muttreja (Right), Bibek Debroy (Centre) and Amit Kapoor (Left) spoke at the release of the study – Investing in Adolescents A Case for India

“Let me congratulate the Population Foundation of India and the Institute for Competitiveness for having produced, what I believe, is the first such report,” Debroy said. “If we’re going to have a vision, we need to keep measuring things continuously.”

Speaking on mental-health issues adolescents face, Debroy said that there was a serious lack of data given that most cases go underreported due to the stigma around such problems. He also talked about the need to act fast to realise India’s demographic dividend. “Beyond 2035, or thereabouts, India will begin to age,” Debroy said. “Even more important that we get our policies on these people who are entering the labour market right.”

Poonam Muttreja, the Executive Director of the Population Foundation of India, stressed the need for collaborative action between various arms of the government and civil-society organisations to work towards adolescent development. “At PFI, we are engaging with a range of ministries that work on young people’s issues,” Muttreja said. “We are also in an ongoing conversation with NITI Aayog to develop a five-year action plan on adolescents. And this report is going to contribute significantly to that.” Muttreja also said that young people’s voices must be included in any policy vision about their future, citing extensive interactions the organisation has had with adolescents.

Several findings of the study are eye-opening. For instance, every additional year of education in India increases a person’s average income by about 6.7 percent. This return is higher for girls than boys – each additional year of education yields an 8.6-percent increase in women’s monthly wages, while for men the number stands at 6.1 percent. The study also found that every rupee invested towards the completion of school education is expected to bring an economic benefit between Rs. 4.5 and Rs. 8.2 in terms of future earnings of each individual.

The study highlights the existing gaps in mental health infrastructure and human resources in the country and pegs the total cost of establishing adequate mental-health facilities for adolescents at Rs. 8,134 crores over the next six years. According to the findings, another Rs. 2,745 crore would be needed per year to cover the treatment costs.

Anaemia and malnutrition are a growing concern among adolescents in the country. The study projects that the cost of providing iron and folic acid tablets to school-going adolescent boys and girls and out-of-school adolescent girls would be roughly Rs. 3,000 crore per year.

The release of the study was followed by an engaging discussion between the panel and “youth champions”- young people who have been working towards changing social norms and improving health and other services in their communities. Two young activists – Jharkhand’s Shivo Gope and Bihar’s Mausam Kumari – spoke at the event about challenges adolescents faced in accessing services during the COVID-19 lockdown. While Gope talked about the struggle to end child marriages in his village, Kumari talked about the way young people can be an asset and partners in the delivery of governance.

Link to the study: populationfoundation.in/investing-in-adolescent-development-a-case-for-india.

About Population Foundation of India

Population Foundation of India was founded in 1970 by a group of socially committed industrialists led by the late JRD Tata and Dr. Bharat Ram. A national non-governmental organization, Population Foundation of India supports and promotes gender-sensitive and people-friendly population, health and development programmes and policies. The organisation works with central and state governments, academics and NGOs using strategic engagement, community action and social and behaviour change communication for better health to improve family planning services, sexual and reproductive health of adolescents and public-health facilities. The foundation is guided by its governing board and an advisory council which comprise eminent persons from civil society, government and the private sector.