TOKYO, Jan. 13, 2022 /PRNewswire/ — Clé de Peau Beauté, Global luxury skincare and makeup brand, turns forty this year – marking four decades in pursuit of Radiance and masterful craftsmanship through science and innovation. This anniversary marks the ideal occasion to commemorate achievements while presenting the brand’s bold aspirations for the future. To herald the next chapter, Clé de Peau Beauté is honored to introduce Dakota Fanning, Diana Silvers, and Ella Balinska as the new faces of the brand. Each one of these incredible women embody characteristics of the brand’s DNA; intelligent and uncompromising, while representing a global community of women who possess an innate radiance that makes each one so extraordinary. 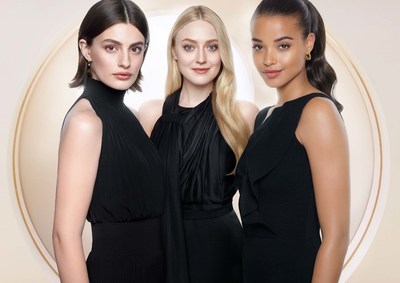 In line with Clé de Peau Beauté’s trademark dedication to harnessing the best in Science and Innovation, the brand leveraged cutting edge technology to congregate media from around the world in The House of Infinite Radiance – a virtual home that presents all facets of the brand, present and future. In The House of Infinite Radiance, guests had the opportunity to meet Clé de Peau Beauté’s three new Global Brand Ambassadors for the first time and preview the covetable collections that will be presented during the year ahead, through interactive touchpoints and bespoke content.

“Our fortieth anniversary is an important occasion for Clé de Peau Beauté and it is the ideal opportunity for us to celebrate the women that we serve. We firmly believe that inner radiance lies at the core of every woman – the brand also recognizes that true radiance is multi-faceted and finds expression in many different ways, each one as uniquely beautiful as the other. I’m therefore delighted to introduce Dakota, Diana, and Ella, three actors who are truly representative of today’s women, empowered, confident, socially conscious, and always working towards unlocking their own potential and the potential of those around them. We’re so excited to have them as a part of the Clé de Peau Beauté family,” said Ms. Mizuki Hashimoto, Chief Brand Officer of Clé de Peau Beauté.

When asked what it meant to them to be joining the Clé de Peau Beauté family, Dakota Fanning said, “It’s an honor – not just to be asked to represent such a distinguished luxury brand but also to take on this role with talented women like Ella and Diana. I’ve always been a fan of Clé de Peau Beauté products and I share the brand’s belief about the importance of embracing and celebrating your unique and individual strengths.”

Diana Silvers added, “Clé de Peau Beauté is a brand with such a rich story, and what really resonates with me is their pursuit of excellence. They’re always seeking to innovate and evolve, and I’ve seen how that results in such high-quality products designed with women’s individual strengths in mind. The brand has built this global community of support around that message, and I’m really looking forward to being a part of that journey with Dakota and Ella.”

Ella responded, “What really speaks to me about the brand is that it champions high-quality products and a global philanthropic mission that empowers girls to find their voice through education. This is important to me, and I’m proud to do that with outstanding women like Dakota and Diana.”

The actors will make their first commercial appearance in January 2022 in a campaign shot by Cliff Watts. Dakota, Diana, and Ella will attend exclusive media launch events, starting this January with The House of Infinite Radiance. Over the course of 2022, Clé de Peau Beauté will be proudly presenting exciting new products and collections to celebrate this special year and to demonstrate their commitment to always striving for ultimate Radiance and perfection.

Clé de Peau Beauté, the global luxury brand from Shiseido Co., Ltd., was founded in 1982 as the ultimate expression of elegance and science. Clé de Peau Beauté means the key to skin’s beauty. The philosophy of the brand is to unlock the power of a woman’s radiance by harnessing makeup technologies and advanced skincare from around the world. Forever guided by an exquisite aesthetic sensibility and intelligence, Clé de Peau Beauté has instilled its products with modernity, enchantment, and dynamism to emerge as an industry leader in delivering radiance so remarkable, it emanates from within. Available in 23 countries and regions worldwide*.

Dakota Fanning is an American actor with an extensive list of films to her name. She is the youngest actor to have been nominated for a Screen Actors Guild Award®. More recently, she was seen reprising her role of Sarah Howard in the second season of the critically acclaimed series, The Alienist. The series premiered in the U.S. as Cable’s No. 1 New Drama and was nominated for a Golden Globe® Award along with an Emmy® Award for Best Limited Series. Fanning, who also recently starred in Quentin Tarantino’s Once Upon a Time in Hollywood, will next be seen starring in the upcoming anthology series The First Lady and the drama series Ripley, both for Showtime. Apart from being a successful actor, she is also an Artist Ambassador for Save the Children.

Diana Silvers, American actor and model, made her debut in M. Night Shyamalan’s Glass. She is known for her role as Hope in Olivia Wilde’s Booksmart, as Erin Naird in Space Force on Netflix, and as Maggie opposite Octavia Spencer in Blumhouse/Universal’s Ma. Diana is a rising star, with headlines naming her “Hollywood’s Newest Leading Lady.” Outside of acting, Diana is passionate about giving back to her community; she supports many philanthropic causes, including St. Jude Children’s Hospital, the National Breast Cancer Foundation, and the Joyful Heart Foundation.

Ella Balinska is one of the most promising young actors of her generation. She is best known for her debut and leading movie role of Jane Kano, a fierce, former MI-6 agent in Charlie’s Angels. Next, she stars in Netflix’s highly anticipated live-action series Resident Evil, which recently wrapped production, and in Blumhouse-produced feature film, Run Sweetheart Run, which premiered at Sundance Film Festival and will have a global release on Amazon Prime. Ella has also been announced to take on the lead role of Frey Holland in Square Enix’s video game epic Forspoken for Playstation 5. Ella has cemented her place in fashion and philanthropy; notably being the Global Ambassador for the iconic Panthère de Cartier Jewellery collection, and was invited to join the British Fashion Council as a founding patron of the BFC Foundation Charity. Having trained at the Guildford School of Acting in London, where she graduated with honors, she recently established a scholarship at her Alma Mater for students from the global majority — supporting and deepening understanding of cultural identity and authenticity whilst training their craft.

AndTV Actors and Their Favourite Corners at Home!