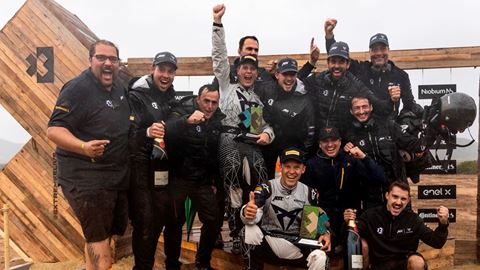 Sardinia, 25 October 2021 – The ABT CUPRA XE team achieved its best result of the season in the Extreme E championship at the Island X Prix, held in Sardinia (Italy). The team’s two drivers, Mattias Ekström and Jutta Kleinschmidt, qualified for the final for the first time and secured a magnificent second position, achieving their first podium in the championship.

The race was held in Capo Teulada, in an Italian army training ground located in the southwest of Sardinia, that proved to be extremely demanding for both vehicles and drivers. The ABT CUPRA XE team adapted to the rigours of the course from the beginning of the weekend, skilfully demonstrated by the drivers on qualifying day as Ekström and Kleinschmidt took third place overall.

With this result, the ABT CUPRA XE went to Semi-final 2, where they fought with two other teams to reach the final. With a second-place finish, Mattias and Jutta qualified for the last round, fighting for overall victory for the first time this season.

The final, held in mid-afternoon on Sunday, with less visibility than previous sessions thanks to a rain-filled session, turned out to be the toughest race seen at Extreme E to date. But that did not stop the ABT CUPRA XE team, taking advantage its fantastic performance and reliability to achieve its best result of the season. After two demanding laps of the 7km course, the e-CUPRA ABT XE1 crossed the finish line in second position, allowing Ekström and Kleinschmidt to celebrate their maiden Extreme E podium.

“It has been another crazy weekend, but this time it has had a happy ending for us. We have fought bravely, but we have also been intelligent,” said Mattias Ekström, who just a week ago celebrated in taking the PURE ETCR title in Pau-Arnos (France), again with CUPRA.

His team-mate Jutta Kleinschmidt added: “I am very happy for the whole team, who have worked very hard every weekend to give us the best car. Now we have our first trophy and of course we want to continue the streak in England.”

After this magnificent result in Sardinia, ABT CUPRA XE climbs to fifth place in the overall championship standings and continues fighting to finish the season in the top three spots – there are only ten points separating it from the current third-placed team. The first season of Extreme E will come to an end on December 18 and 19 with the Jurassic X Prix, taking place in Dorset (UK).

HarperCollins presents ‘Looking for the Enemy: Mullah Omar and the Unknown…

HarperCollins presents ‘Looking for the Enemy:…