by GlobeNewswire
in Uncategorized
250 3
0 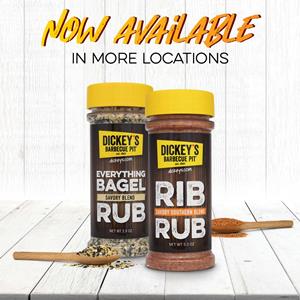 DALLAS, April 18, 2022 (GLOBE NEWSWIRE) — Dickey’s Barbecue Pit retail line continues to be picked up by retailers nationwide making it easier to find your favorite foods and seasonings at your local grocery store. Dickey’s popular spices, Everything But the Bagel Rub & Rib Rub, are now available for purchase at 2,000 Kroger locations across the country. Get your hands on our dry rub for that authentic Texas BBQ flavor.

Headquartered in Cincinnati, Ohio, The Kroger Co. is one of the largest retailers in the United States which operates 2,750 grocery retail stores. Customers will start seeing the rubs available for purchase the week of 4/17 and 4/23. Come on in to your local Kroger store and pick up Dickey’s BBQ favorites!

“We are beyond thrilled our Everything But the Bagel & Rib Rubs are now widely available on Kroger shelves nationwide,” said Roland Dickey Jr., CEO of Dickey’s Capital Group. “It’s been incredible to witness our retail line’s exponential growth since its initial launch in retail locations and Amazon in June 2021 and we look forward to seeing what’s next!”

Dickey’s is proud of its products and the rubs are no exception. The Everything But the Bagel Rub is the perfect addition for just about, well, everything. Rub it on your favorite meat or sprinkle on your favorite vegetables for a savory flavor, leaving you wanting more! The Rib Rub is a savory spice blend and the same Rib Rub used in all Dickey’s Barbecue Pit stores. Rub on ribs before you barbecue for a savory caramelized glaze with a hint of sweetness.

Currently located in over 18 retail chains across the country, you’ll also be able to find the famous canned barbecue baked beans, signature seasonings, rubs and barbecue sauce, the signature short ribs available in spicy, sweet, and original flavors and craft sausages in Original, Jalapeno Cheddar and hot links. Additional retailers are signing up so be sure to check out the full line at www.barbecueathome.com and by visiting Dickey’s Amazon page for additional products.

Dickey’s Barbecue Restaurants, Inc., the world’s largest barbecue concept, was founded in 1941 by the Dickey family. For the past 80 years, Dickey’s Barbecue Pit has served millions of guests in 44 states Legit. Texas. Barbecue.™ At Dickey’s, all our barbecued meats are smoked onsite in a hickory wood burning pit. Dickey’s proudly believes there’s no shortcut to true barbecue and it’s why our name isn’t BBQ. The Dallas-based, family-run barbecue franchise offers eight slow-smoked meats and 12 wholesome sides with ‘No B.S. (Bad Stuff)’ included. Dickey’s Barbecue has 550 locations across the United States and eight other countries.