Excelsior Trustee to Receive the Pat Tillman Award for

by GlobeNewswire
in Lifestyle
252 3
0 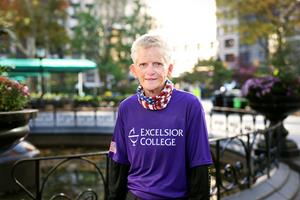 Albany, NY, June 17, 2022 (GLOBE NEWSWIRE) — Gretchen Evans, retired Army command sergeant major and Excelsior College trustee, will be presented with the Pat Tillman Award for Service during the 2022 ESPYS. The event will air live on ABC on Wednesday, July 20 at 8 pm ET. The award is named for the former NFL player and U.S. Army Ranger and given annually to an individual with a strong connection to sports who has served in ways that echo his legacy.

Evans’s highly decorated Army career ended after suffering a life-altering injury from a mortar round blast while on assignment in Afghanistan. The injury resulted in traumatic brain injury, total hearing loss, and other wounds. As she regained her footing as a veteran, she founded Team UNBROKEN, an adaptive racing team of mostly veterans who have experienced life-altering injuries, illness, or traumas, which competed in the World’s Toughest Race: Eco-Challenge Fiji.

“The transition out of the military was rocky. Finding my next chapter to serve nonprofit organizations, tell my story, and remain physically strong and competitive gave me purpose,” said Gretchen Evans, a member of the Excelsior College Board of Trustees. “I joined the Excelsior board of trustees because half of Excelsior’s students are military or veterans, and I believe that education is one of the most important parts of the transition for veterans. Excelsior students and alumni demonstrate the grit and determination that has helped me persevere.”

The Pat Tillman Award for Service is the most recent recognition of Evans’ service as a veteran. In addition to serving on Excelsior’s board of trustees, Evans has been inducted into the U.S. Army Women’s Hall of Fame and U.S. Veteran Hall of Fame.

“Gretchen Evans is an inspiration and motivation to everyone she meets. Our Excelsior community is excited to cheer her on as she receives the Pat Tillman Award,” said David Schejbal, president of Excelsior College. “Congratulations on this much deserved honor.”

Thousands of Athletes, Coaches and Fans Came Together to

Thousands of Athletes, Coaches and Fans Came Together to