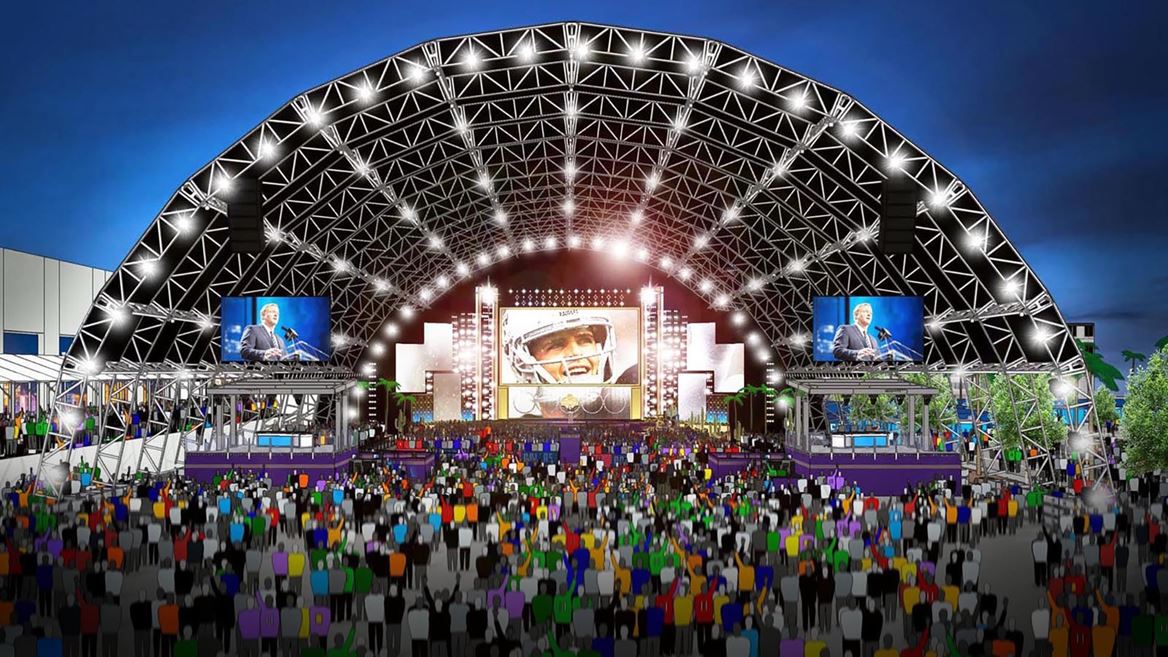 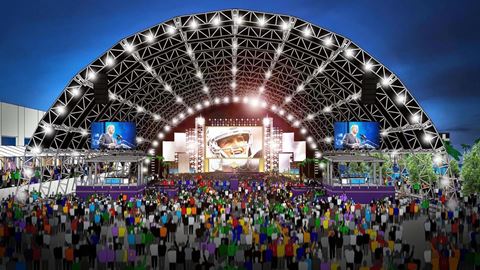 LAS VEGAS – Las Vegas once again shows the world why it is The Greatest Arena on Earth™ as it hosts the 2022 NFL Draft. From Thursday, April 28 to Saturday, April 30, official NFL events will take place alongside exciting experiences, viewing parties and world-class entertainment and shows that can only be found in Las Vegas.

In celebration of this event occurring for the first time in Las Vegas, the destination will welcome the 2022 NFL Draft by Bud Light with a citywide marquee takeover on Wednesday, April 27 from 8:30 to 9:30 p.m. PDT. Several resorts are also participating in the celebration by placing football eye black stickers on iconic landmarks, including the lion at MGM Hotel and Casino, the Sphinx at Luxor Hotel and Casino, the David statue at Caesars Palace and more.

The National Football League is hosting the following day and evening events throughout Draft weekend. Fans can visit NFL.com/OnePass to gain free entry to the NFL Draft Concert Series presented by Bud Light.

Draft Experience at The High Roller

Draft Red Carpet at The Fountains of Bellagio

The NFL’s top prospects will take the stage on the Fountains of Bellagio, where they will make media rounds on the Red Carpet before heading to the Draft Theater where draft picks will take place. The Red Carpet will also play host to several local Las Vegas acts throughout the three-day event.

Draft Theater at The High Roller and The LINQ Promenade

Football fans will also be able to view the Draft Theater as part of the experience, where some of the league’s prospects will take the stage to celebrate being selected to their new team.

Exciting Entertainment Opportunities Throughout the Weekend

This production show marries circus, burlesque, and vaudeville acts for an adults-only night out that is like no other.

This production show features a little bit of something for everybody, from comedy and song to danger and dance—not to mention it stars some of America’s most beloved acts from the hit reality TV show.

Daniel Tosh at The Mirage

The satirical comedian returns to The Mirage for another show in the long-standing Aces of Comedy series. Catch his comedic takes on current events when he takes the mic on an iconic Las Vegas stage.

Darci Lynn at The Mirage

The champion ventriloquist who captured the country’s heart during America’s Got Talent finds her way to the Mirage stage during NFL Draft weekend, entertaining audiences with her sweetheart sensibilities and undeniable talent.

An Evening with Whitney: The Whitney Houston Hologram Concert at Harrah’s Las Vegas

Do you want to dance with somebody? This hologram spectacle features the iconic artist’s most memorable songs—perfect for some singalong action!

The soulful artist, maybe best known for his judging role on NBC’s The Voice, brings his soaring vocals and silky-smooth piano playing to Planet Hollywood’s Zappos Theater. Experience his “Love in Las Vegas” show, which no doubt will feature many of his celebrated ballads.

Mother Monster’s Lady Gaga Jazz & Piano features the megastar performing stripped-down versions of her album favorites, as well as her own special versions of tunes from the Great American Songbook. The Academy Award and GRAMMY winner gives her all on Park MGM’s stage.

The GRAMMY Award-winning crooner brings his soulful style and powerful pipes to the Resorts World Theatre. Known for original songs like “Haven’t Met You Yet” and covers of iconic pieces like Duke Ellington’s “Don’t Get Around Much Anymore” featuring Tony Bennett, this is sure to be a night to remember while watching a star take the newest stage in Las Vegas.

Christian rock band NEEDTOBREATHE will supply a fresh breath of alternative rock at The Venetian Theatre during NFL Draft weekend. The group will excite the crowds with its chart-topping tunes.

Opium at The Cosmopolitan of Las Vegas

From the same creators behind Absinthe is Opium, a fast, funny, and funky love letter to B-grade science fiction films, brought to life by several variety show performers.

The New York Times called him the “hottest comic in America,” which might explain why he’s invited back for yet another run of shows at Wynn Las Vegas. Experience his sarcastic journey in-person in between all the NFL fandom excitement.

The Beatles LOVE by Cirque du Soleil at The Mirage

The Fab Four’s music comes to life in this visually astounding production by Cirque du Soleil. A multi-sensory psychedelic spectacle, this in-the-round production is celebrated worldwide.

Art Houz Theaters in Downtown Las Vegas will screen the selections live on one of its luxury theater screens. The space also features an expansive menu to indulge in while watching the action.

Fremont Street Experience will host a jam-packed weekend of free concerts and shows on all three of its stages in Downtown Las Vegas. The famed digital canopy will also feature an NFL-themed show from Thursday, April 28 to Sunday, April 30 titled “Grid Iron Girls.”

Red Rock Casino Resort & Spa will be hosting a complimentary in-person draft party on Thursday, April 28 at 3 p.m. at the hotel’s Race and Sports Book. The event will be hosted by former Minnesota Vikings player-turned-head coach Mike Tice and 11-season pro football vet Corey Chavous. Guests in attendance can enter to win draft caps from each team in the league and a slew of prizes from Red Rock Casino. Beverage specials throughout the event will be offered as well.

ABOUT THE LVCVA
The Las Vegas Convention and Visitors Authority (LVCVA) is charged with marketing Southern Nevada as a tourism and convention destination worldwide and with operating the 4.6 million square-foot Las Vegas Convention Center (LVCC). With 150,000 hotel rooms and 14 million square feet of meeting and exhibit space in Las Vegas alone, the LVCVA’s mission centers on attracting leisure and business visitors to the area. The LVCVA also owns the Las Vegas Convention Center Loop, an underground tunnel designed by The Boring Company and the Las Vegas Monorail, an elevated 3.9-mile system with seven stops throughout the resort corridor. For more information, go to www.lvcva.com, www.visitlasvegas.com or www.vegasmeansbusiness.com.