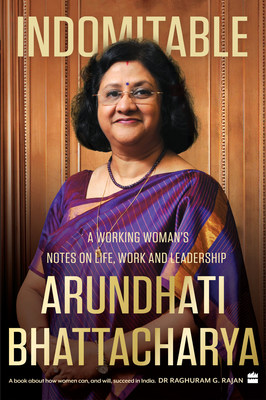 – Indomitable: A Working Woman’s Notes on Life, Work and Leadership by Arundhati Bhattacharya

NEW DELHI, Jan. 10, 2022 /PRNewswire/ — Growing up in the sleepy towns of Bhilai and Bokaro, Arundhati Bhattacharya never imagined that one day she would go on to chair India’s largest bank. It was sheer chance that she came to know of the bank probationary officers’ entrance examination through a friend. She applied, was selected and went on to have a glorious banking career spanning four decades.

Indomitable is the story of Arundhati’s life as a banker and the challenges she faced in a male-dominated bastion. She takes the reader through her growing up years and early education in the 1960s, getting to Kolkata for her college education and then into the State Bank of India, where she started her career.

The life of a woman banker with a family in a frequently transferrable job isn’t easy. In Arundhati’s life, too, there were breaking points when she almost thought of quitting her career to balance her personal aspirations with her family’s needs. But she didn’t give up. Instead, she faced her challenges with humour and positivity and took up every assignment as a new chapter in learning and adapting.

In her role as the chairman of SBI, she steered the bank through some of its worst phases. She inspired confidence in the banking sector when the NPA crises led to a significant public trust deficit. Under her leadership, SBI metamorphosed into a customer-centric and digitally advanced bank while playing a pivotal role in national development. Some of her human resources initiatives included industry-first practices that were appreciated and later adopted by other banks.

Candid, lucid and humble, Indomitable is the story that will galvanize you to embrace challenges, break barriers, push forward and achieve greater heights.

“From a very young age I listened to many older people talking about migrating to the Western world as it was defined as ‘the land of your dreams’. First it was UK then USA and Canada and thereafter Australia and Singapore. I often wondered why India couldn’t become the land of one’s dreams. But I was told in India things don’t work unless you know people. That capital was scarce and that the multiple barriers to living out your dreams didn’t allow for anything other than a mundane existence to people coming from small towns with no backers or backgrounds.

Did that mean people like me couldn’t dream? This book is written to prove that India can be the land of our dreams and it is our ability to reach out with the right attitude and the right ideas that will get us there. Today’s generation is proving me right and I am so proud of them. So to all those who dared to dream – cheers! Hang in there and you will make it,” says the author, Arundhati Bhattacharya.

“Indomitable is the story of small towns, big dreams and greater achievements. Arundhati’s journey, growing up in the sleepy towns of Bhilai and Bokaro, getting into a challenging banking job and leaving her mark as an exceptional leader is an inspiring tale that will be etched in a reader’s mind for years. We are excited and privileged to be publishing this book,” says Sachin Sharma, Executive Editor, HarperCollins India.

Arundhati Bhattacharya is the first woman to chair the State Bank of India (SBI), a 210-year-old institution, India’s largest bank and a Fortune 500 company. Currently, she is the chairperson and CEO of Salesforce India, a cloud-based SaaS company, listed in the USA and headquartered in San Francisco.