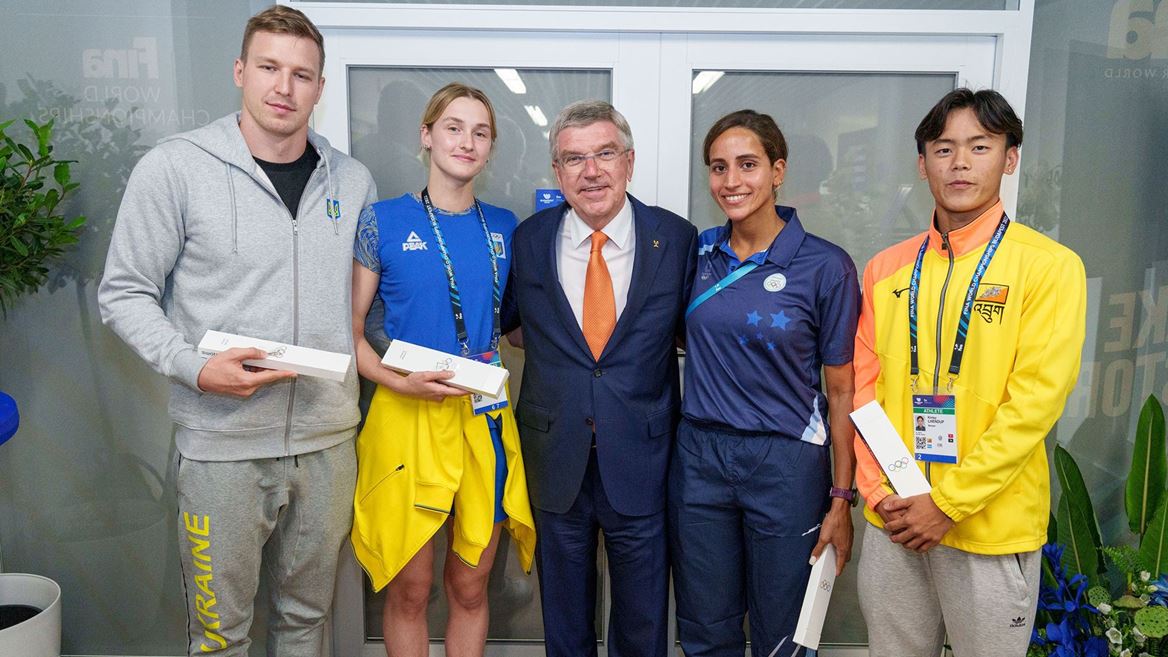 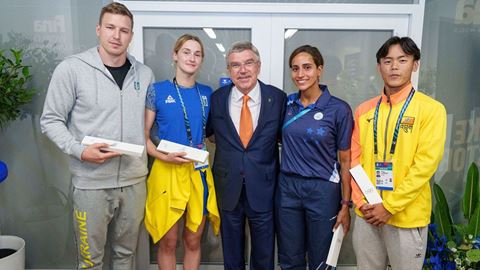 21 Jun 2022 – Attending the opening of the FINA World Aquatics Championships in Budapest last weekend, IOC President Thomas Bach addressed the Extraordinary FINA Congress. Congratulating FINA on its latest reforms with regard to athlete representation, the independence of its doping programme, gender equality and good governance, the IOC President emphasised the continuous need to adapt.

President Bach said: “What was true when we started with Olympic Agenda 2020 is still true today, when we are implementing Olympic Agenda 2020+5. It means change or be changed. If we do not change in the world of sport, if we do not adapt to the new life, post-pandemic and hopefully soon post-war in Europe – and even more, hopefully post-war all over the world – if we do not take the right decisions now, if we are not pro-active in this respect, then sports and each sport will lose a lot of relevance in society, and this is something we have to take as an encouragement. Like with every crisis, we have to see it as an opportunity.”

The IOC President invited FINA to join the Sports for Climate Action Framework, in which 300 sports organisations are already participating. The initiative was launched by the United Nations Framework Convention on Climate Change (UNFCCC), in partnership with the IOC. It aims to set the course for the sports world to address climate change through concrete commitments and partnerships, while applying verified standards to measure, reduce and report greenhouse gas emissions – in line with the Paris Agreement.

The Championships in Budapest were opened on Saturday night by the recently elected Hungarian President, Katalin Novák, who welcomed President Bach to the Presidential Palace before the opening ceremony. The two discussed a range of topics, including the development of sport in schools and at elite level in Hungary. The IOC President was accompanied by the IOC Members in Hungary, Pál Schmitt and Daniel Gyurta, as well as the President of the National Olympic Committee of Hungary, Zsolt Gyulay.

President Bach also met with Hungary’s Prime Minister, Viktor Orbán, during his three-day stay in Budapest. The IOC President congratulated the Prime Minister on the excellent development of sport in Hungary. The country has been and will be host to many international championships recently and in the years to come. The two leaders also discussed the geopolitical situation.

Meeting the organisers and watching the competitions, the IOC President congratulated the Organising Committee on their remarkable work. It was only in February that they took on the organisation of these Championships. Building on the experience of 2017, when Budapest also organised the FINA World Aquatics Championships, the Hungarian organisers put the event together on very short notice.

“Hungary have not only had success in the Olympics with the athletes, but they have also proven to be excellent organisers. In the last couple of years, they have organised countless World Championships, European Championships and World Cups, and they were all very successful. And then on top, there are the successful Hungarian athletes, who I think are great role models for the Hungarian people to practise sport themselves. So it’s really a good experience to be back in Hungary,” said President Bach, who awarded the medals in the first swimming competition, the 400m freestyle, to Elijah Winnington from Australia, Lukas Martens from Germany and Guilherme Pereira da Costa from Brazil.

The IOC President also met with a number of participating athletes, including Kamila Isaieva and Andrii Govorov from Ukraine, Julimar Ávila Mancia from Honduras and Kinley Lhendup from Bhutan. The two Ukrainian athletes told the President about their journey to Budapest despite the ongoing war in Ukraine, after the Russian army’s invasion of the country. Led by the IOC, the Olympic Movement is helping the athletes in Ukraine with a solidarity fund, to enable them to continue training and participating in international competitions.

While in Budapest, the IOC President also met with Jenö Kamuti, the President of the International Fair Play Committee (CIFP), to discuss the latest CIFP ideas to promote fair play in sport.