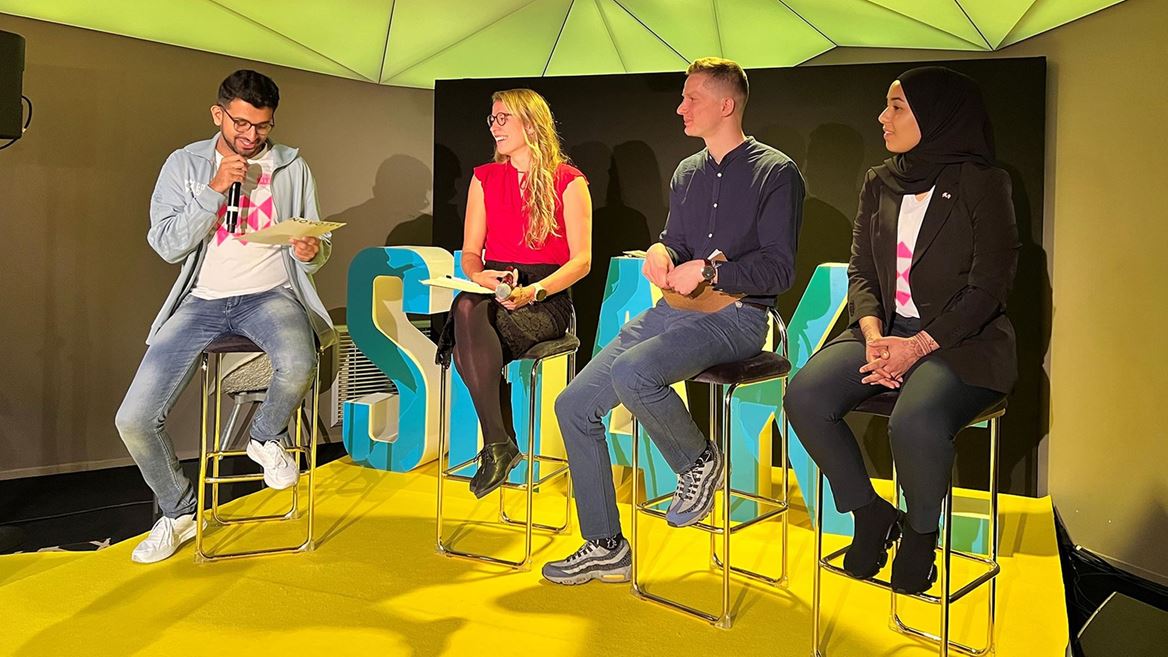 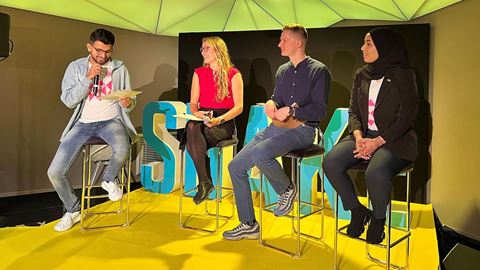 13 May 2022 – Highlighting the youth perspective on the role of sport in society, the IOC Young Leaders participated in a panel discussion entitled “Tackling Unequal Access to Sport – powered by IOC Young Leaders and Young Sports Makers” during Global Sports Week (GSW) in Paris.

Over 2,000 delegates onsite – and many more virtually – participated in Global Sports Week from 10 to 12 May 2022, where delegates from all over the world came together to discuss the future of sport at the intersection of business and society. With the aim of bringing the youth angle to the forefront, the IOC and GSW co-organised a panel discussion allowing both IOC Young Leaders and GSW Young Sports Makers to share their projects aiming to drive change and secure equal access to sport in their communities.

Building a supportive network for girls and women in judo

IOC Young Leader and former judo athlete Laura-Maria Tiidla saw first-hand how girls and women can be excluded from sport. As a child, she was involved in judo through her family, with her father as a coach and her brothers also taking part. It wasn’t until she was older that she realised that she was always the only girl involved and the only one who had to fight for resources. Indeed, even in her professional role as Secretary General of the Estonian Judo Association, she still found that she was interacting with boards made up entirely of men.

This reflection inspired Laura-Maria’s IOC Young Leaders project, “Julgen olla judoka” (Judo for All), which is focused on gender equity and how to build a supportive network for girls and women through sport. Laura-Maria began by addressing gender-specific issues in judo that male coaches may not know or think about, such as the impact of the menstrual cycle on weight loss and management, the need for sports bras, and even the way women need to tie their hair for competitions.

In a sport dominated by male coaches, referees and managers, the 20 per cent of judo practitioners who are women can be relegated to an afterthought by associations, and so Laura-Maria looked to reverse that through her project. She invited 40 teenage girls to take part in a weekend of practical judo sessions, where participants could also learn from expert female speakers with diverse experiences in judo and share their own personal stories of different ways of staying connected with the sport besides being a competitive athlete.

The overall aim of Judo for All was to increase the number of girls and women taking part in judo and other combat sports, in particular teenage girls, who have a high dropout rate for sports. Laura-Maria continues working on gender equity and youth involvement in her role as a member of the IOC Sport and Active Society Commission, and through mentoring the new generation of IOC Young Leaders.

IOC Young Leader from Slovakia Kamil Pavlinský focused his project on ensuring that underprivileged children have access to sport. Having done research in his home city of Presov, the professional volleyball player found that these children, including those from socially disadvantaged families and orphans, were most affected by a lack of opportunity to participate in any kind of sport and were often left feeling lonely. Kamil drew on his own experience, when his parents went through a divorce, to discover how powerful sport can be in getting people through difficult moments and making them feel part of a team. Through his project, “Sport Chance”, he wants children to feel the same way.

As such, Kamil aims to introduce children to sport and ensure their long-term participation through two key steps. Firstly, an Olympic sports camp allows them to try a host of different sports each day while simultaneously educating them in the Olympic values and Olympism. If a child is then interested in continuing one of those sports, the project helps to connect them with a local team or organisation to ensure that they can participate on a regular basis in the future.

Rishav, who is also an IOC Young Leader and was the moderator of the panel, launched his project, SportsXAll, after seeing a lot of talented children in his community, including his friends, having to quit sports due to a lack of access or funding. As such, national-level rifle shooter Rishav aims to improve sports conditions in Kolkata, India, by providing funding for children to ensure that their access to and participation in sport are not restricted for reasons out of their control.

Also focusing on eliminating barriers to sport through her project, Nagin was inspired by her own introduction to sport after falling into football by chance. Having come from Afghanistan to Denmark at early age as a refugee, the sport helped her to adapt to her new surroundings and feel a sense of belonging in her new community.

Now, through her project and as a football coach, she aims to eliminate as many barriers to participating in sport while also making the sport as inclusive as possible, whether that be through lowering or eliminating fees, or as simple as allowing people to play in clothes appropriate to their beliefs, and encouraging people of all backgrounds to take part.

If you believe it, you can be it

Through a lively discussion, these young leaders passed on their key messages to the sports world and its leadership, showing how through their own efforts at community level, they are driving change to break down barriers and foster inclusion, making the world a better place through sport.

The IOC Young Leaders programme, launched in 2016 along with founding partner and Worldwide Olympic Partner Panasonic, empowers talented young people to leverage the power of sport to make a positive difference. The four-year programme teaches the participants how to devise, design and realise their own sustainable sport-based social business.

Learn more about the IOC Young Leaders Programme here and follow us on:

Nippon Paint India Aims to Reach Out to Over 10,000 Garage Painters through a Nationwide Initiative

Progress to Participate in the 17th Annual Needham

Progress to Participate in the 17th Annual Needham

“Selective secularism is dangerous for the country,” says Director Vivek Agnihotri during CMFF-2022 at Chandigarh University