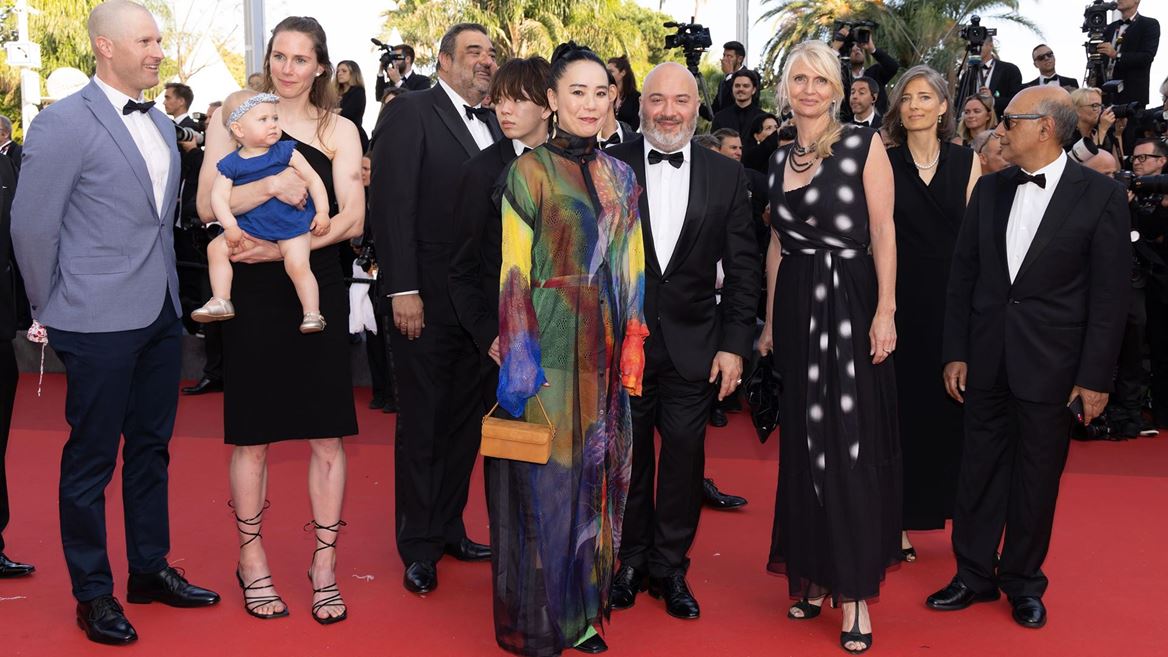 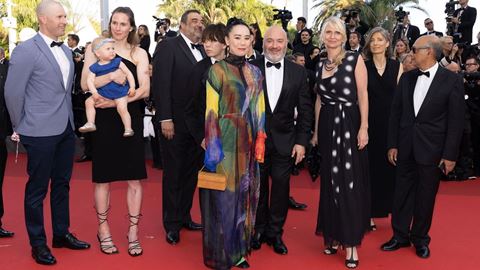 26 May 2022 – The Official Film of the Olympic Games Tokyo 2020 Side A, by award-winning director Naomi Kawase, was screened at the Palais des Festivals et des Congrès as part of the Cannes Classics selection, after a red-carpet welcome. Marking a historic moment at what is the 75th anniversary edition of the prestigious cinematic event, Olympian Kim Gaucher joined Kawase on the red carpet, along with her partner and 14-month-old daughter.

Canadian basketball player Gaucher is one of many athletes who feature in the film. She and her family play a central role in the film’s narrative of female athletes who participated in the Olympic Games Tokyo 2020.

Gaucher said she was “delighted that the film brought to light the challenges inherent in balancing being a professional female athlete and a mother with a young child”.

“It was lovely to be here in Cannes for the world premiere of the film and to share this moment with my family, who supported me on my journey to the Tokyo Games. The film presents the best in me as both an athlete and a parent,” she added.

Kawase – a Cannes afficionado with multiple awards and competition selections – said stories such as those of Gaucher inspired her vision.

“There are Olympian mums like Kim Gaucher, performing the perpetual balancing act of competing at the highest levels of their sport while also being mothers,” she said. “I find strength through the tenacity and grace of these women. I watch the connection between these mothers and their babies, and I have to wonder: how will these young children see this film, years from now? They are the future, the renewed bright energy propelling us forth. And it is with this hope that I tell such stories.”

The Official Film by Kawase has been produced in two parts: one depicting the Games through the eyes of the athletes (Side A), and the other from the perspective of staff and volunteers (Side B). While “Side A” was screened as part of the Cannes Classics selection on 25 May, “Side B” is slated for release later, in June.

The film was produced by the Kinoshita Group and the Tokyo 2020 Organising Committee, in collaboration with the International Olympic Committee (IOC), and its message goes beyond physical exploits and focuses on some of the human stories of the Games.

IOC Member and film producer Anant Singh, who led the IOC delegation at the screening, said: “The films of the Olympic Games have a legacy that is over 100 years old. Naomi’s film continues this tradition and brings audiences into the emotions and challenges of the first ever postponed Games, which live audiences couldn’t be a part of. The film gives insight and a bird’s eye view that was missed by many.”

Composer David Hadjadj, who wrote the original score for the film, was also in attendance at the Cannes premiere, along with other members of the production crew.

Kawase was the youngest filmmaker to win the Caméra d’Or award for best debut director at the Festival de Cannes with her first feature, Suzaku, released in 1997. She is also the first Japanese woman to be appointed a UNESCO goodwill ambassador in recognition of her film work, which focuses on the stories of women across generations.

“It was a wonderful opportunity to present the Official Film of the Olympic Games to a wider audience thanks to the selection at Cannes,” said Yasmin Meichtry, Associate Director of the Olympic Foundation for Culture and Heritage (OFCH), which leads the IOC’s collaboration on official films. “With Naomi Kawase helming the project, we were sure of the cinematographic value and artistic perspective of the film. This film will complement the already strong audiovisual heritage of Tokyo 2020 that we have thanks to the broadcast footage.”

Since the early 20th century, films have been created for every edition of the Olympic Games. Throughout the decades, accomplished international filmmakers have been inspired by the Olympic Movement to push the boundaries of the Olympic documentary tradition and create powerful cinema as part of the Olympic Games’ cultural legacy. The Olympic Film Collection is composed of more than 50 feature-length films that offer a cinematic window into defining moments in the history of the modern Games.

Luxe By Meena Launches New and Trendy Clothing Products in