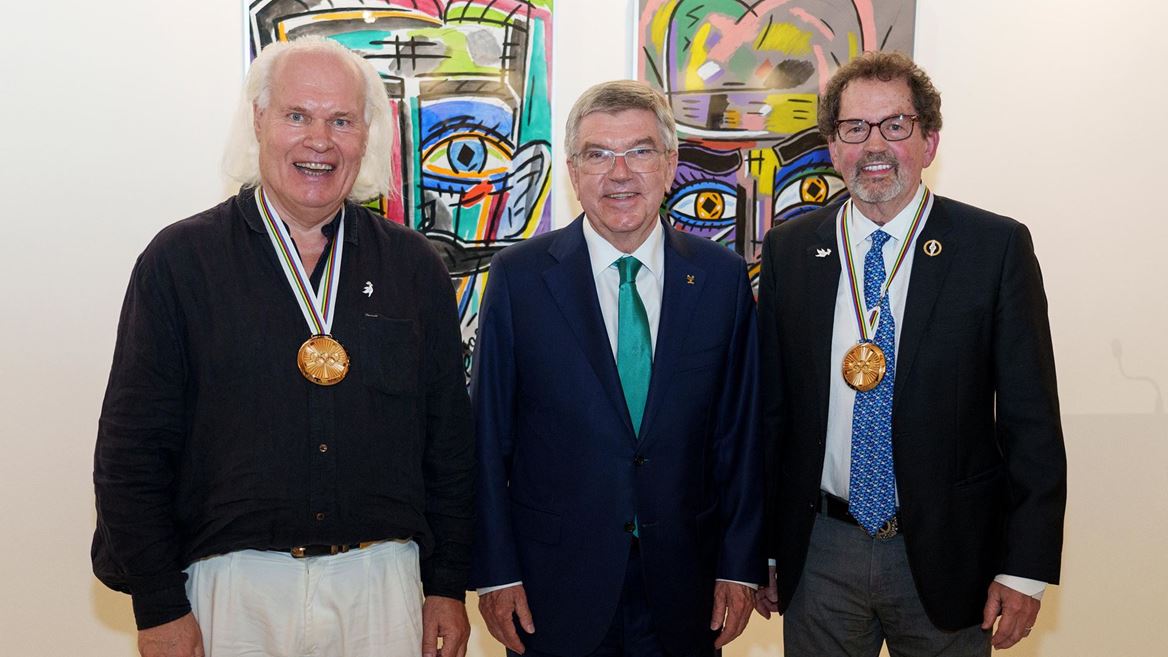 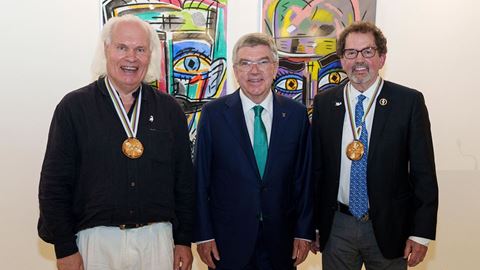 23 Jun 2022 – Artist Rolf Lukaschewski and Olympic writer George Hirthler were presented with the Pierre de Coubertin Medal during a ceremony on Olympic Day 2022 at Olympic House in Lausanne. The awards were presented by IOC President Thomas Bach, in the presence of IOC Vice-Presidents Ser Miang Ng and John Coates, IOC Member Richard Pound, and other guests and IOC staff.

The artwork of Rolf Lukaschewski is currently on display in Olympic House, and with the artwork of Portuguese artist Telmo Guerra served as the backdrop for the ceremony.

Addressing Lukaschewski, the IOC President said: “Our founder, Pierre de Coubertin, who was also an art lover, once said: ‘Sport must be seen as a producer of art and an occasion for art. It produces beauty because it gives rise to the athlete, who is a moving sculpture.’ The paintings displayed here, culminating with the Coubertin ‘Super Star’ portrait, are a perfect reflection of these words and of the vision of our beloved founder. They are also a wonderful demonstration of your unique artistic style, which you call positive expressionism.”

Sport and art inspire the world with the universal Olympic values of excellence respect, friendship and peace, Bach continued, adding: “This is why I would like to congratulate you on this inspiring positive expression of channelling the vision of Coubertin through your extraordinary art.”

George Hirthler’s Olympic journey started in 1989 when he worked on the Olympic bid by Atlanta, which was eventually awarded the right to host the Games in 1996. During his career, George Hirthler has written almost 3,000 pages of bid books and campaign materials, countless film scripts and presentations for parties interested in hosting the Olympic Games. “George Hirthler can be considered not only as one of the leading intellectuals of the Olympic Movement today, but also as one of the foremost experts and promoters of the Olympic legacy of our founder, Pierre de Coubertin,” said the IOC President.

He continued: “The most remarkable illustration of your passion is captured in ‘The Idealist’ – the historical novel which you authored, telling the unforgettable story of Pierre de Coubertin, the Olympic dreamer and visionary. Based on the tremendous research that went into writing ‘The Idealist’, you also set up the ‘Coubertin Speaks’ website, publishing daily inspirational quotes from Coubertin. In this way, you put the ideas of our founder into historical context and make them available to a global audience. I have to admit that I am among those who draw inspiration from this treasure trove of quotes – and quite a number of them have found their way into my speeches and messages over the years.”

The Pierre de Coubertin Medal is an award intended for representatives of the world of culture and education. The Medal, which was created in 1997, is a tribute to people who, through their teaching, research and writing of academic works and art in the spirit of Pierre de Coubertin, help to promote the essence of Olympism.

Do you love aviation? Come fly with Cirrus!

Do you love aviation? Come fly with Cirrus!

AndTV Actors and Their Favourite Corners at Home!