Refugee athletes share stories of their journeys to citizenship 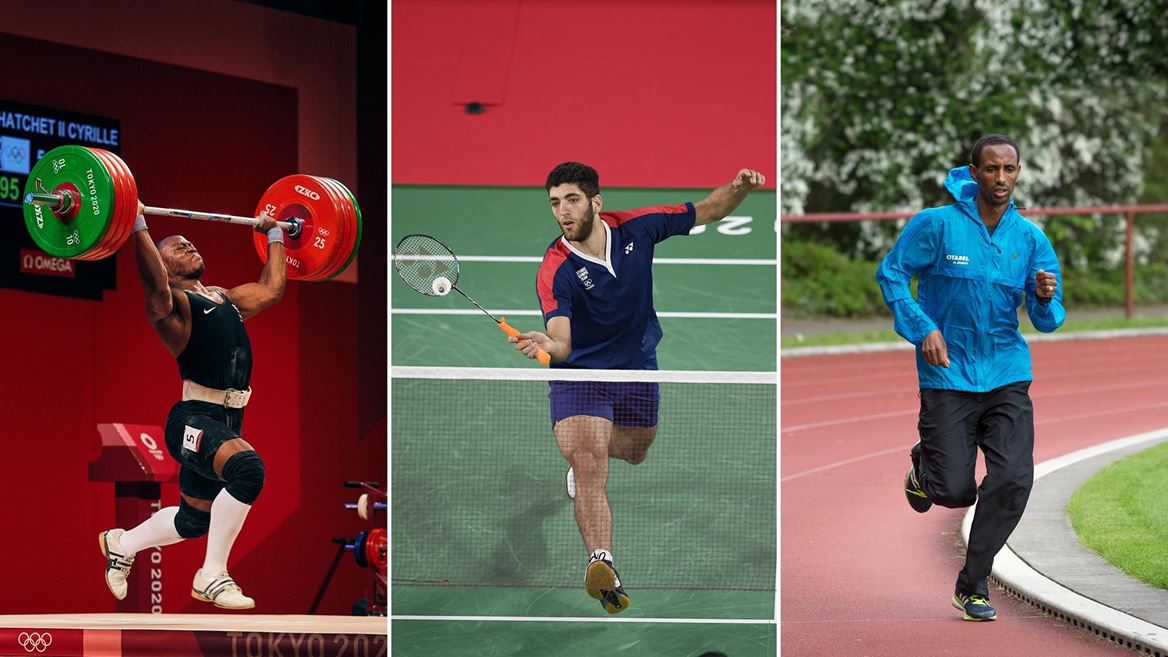 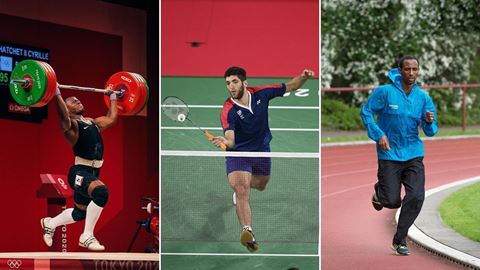 20 Jun 2022 – On World Refugee Day, we look at the inspirational stories of three athletes who, having represented the IOC Refugee Olympic Team, have now been granted citizenship in their host countries. Three different journeys that all send the same message of hope and humanity.

“I now represent Great Britain, which makes me feel included”

The 2022 Commonwealth Games will be a poignant occasion for Cyrille Tchatchet II. In 2014, the weightlifter competed for Cameroon in the Commonwealth Games in Glasgow (Great Britain), finishing fifth in the 85kg category. After the Games ended, however, feeling it would be unsafe to return to his home country, he chose to stay and seek asylum in Britain.

In August, eight years on from that life-changing decision, Tchatchet will again step up to the platform in the Commonwealth Games, in the host city of Birmingham (Great Britain), where he once lived in a refugees’ hostel. This time, he will be wearing the colours of England, after being granted British citizenship earlier this year. It has been an extraordinary journey, with many highs and lows.

“Walking out of the Commonwealth Games village, I realised I couldn’t return home,” Tchatchet explains. “I found myself on the streets, experienced homelessness, and had to deal with the stress of waiting for my asylum application to be approved. I sought asylum in Brighton and, because my visa expired, I was arrested for breaching the UK’s immigration laws.”

Facing an uncertain future, Tchatchet was taken to an immigration removal centre in Dover, where, in a twist of fate, he reconnected with weightlifting. “Even though I was very low and my mood wasn’t good, when I got there, the immigration detention officer found out I was a weightlifter and encouraged me to get into the gym,” he says. “I had a couple of sessions there before I was transferred to a detention centre in London, and then I eventually got released.”

Tchatchet was rehoused in Birmingham and, as his asylum case progressed, so did his weightlifting career. He competed in the British Junior Championships in 2015 before receiving an Olympic Scholarship for Refugee Athletes from the IOC. Thanks to that support and extra funding, he was able to compete for the IOC Refugee Olympic Team at the Olympic Games Tokyo 2020, finishing 10th in the 96kg weightlifting competition.

“I now represent Great Britain, which makes me feel included. I’m really honoured,” says Tchatchet, 26, who works as a psychiatric nurse when he’s not busy weightlifting. “Like all other athletes, refugees have dreams to go to the Olympic Games. I want them to know that it’s always possible – they need to keep training, remain hopeful and compete as often as they can. If they do this, the future is very bright.”

“Badminton helped me to integrate with others”

Aram Mahmoud is also celebrating a fresh start in 2022. Like Tchatchet, his team-mate in the IOC Refugee Olympic Team at Tokyo 2020, Mahmoud was granted new citizenship earlier this year, in the Netherlands.

For Mahmoud, who fled Syria’s war-torn capital of Damascus in 2015, badminton, and participating in sport, have played a pivotal role in his integration in his new country. After arriving in the Netherlands, the then-teenager was relocated several times before badminton helped him find a permanent home in Almere.

“It has been a journey of a lot of ups and downs. Because of the sad situation in my home country of Syria, I had no choice but to leave, but when I first came to the Netherlands, badminton helped me a lot to integrate with others and learn the language,” says Mahmoud, now 24, who was a star junior badminton player in Syria.

Having previously competed for Syria, Mahmoud had to wait three years until he could rejoin the international badminton circuit. But he quickly made up for lost time, soaring up the world rankings from a position of 937th in 2018, and was rewarded with a Refugee Athlete Scholarship from the IOC the following year. Two years later, he was an Olympian.

“When the IOC President announced my participation and I was selected to go to Tokyo, it was one of the best moments of my life, because my dream was coming true,” says Mahmoud, who became the first athlete to play badminton for the Refugee Olympic Team. “I have to say that it feels amazing [to have been at the Games] because it is something that will stay with me my entire life [and] that no one can take away.”

“Sport gave me a family”

It was in Kinde’s native Ethiopia where he first developed a love for the sport, running back and forth to school as a teenager in order to save his bus money. Encouraged by one of his teachers, he began competing in athletics and soon excelled in long-distance events.

But life changed completely in 2012 when Kinde fled Ethiopia. Arriving in Europe that winter, he was granted asylum in Luxembourg the next year – and, just as it did for Tchatchet and Mahmoud, sport had a central role in helping him build a new life.

“Running taught me to be stronger. Running helped me to integrate with people. And running helped me to find myself,” says Kinde, who went on to win events in France and Germany. “Sport gave me a family, not just in Luxembourg, but around the world.”

After becoming the first athlete from the Refugee Olympic Team to compete in the marathon at Rio 2016, Kinde combined his running with studies in pharmaceutical logistics in Luxembourg, while also working in a pharmacy distributing COVID-19 vaccines.

Then, in 2020, seven years after he was granted asylum, Kinde reached the next milestone in his journey when he became a citizen of Luxembourg.

“It’s a great thing for me, when I’m searching for jobs, and also to integrate more with people,” he says. “I can also represent Luxembourg in sport.”

It is a path that has been followed by Tchatchet and Mahmoud, with more members of the Refugee Olympic Team on course to be granted citizenship in other countries. But Kinde, like his fellow athletes – whether living in Luxembourg, Great Britain, the Netherlands or elsewhere in the world – remains hugely proud of being part of that historic team and what it represents.

“The IOC Refugee Olympic Team is a symbol of hope – for refugee athletes, and also for refugees around the world.”

This Yoga Day, Experience Martial Arts Like Never Before on Andflix

This Yoga Day, Experience Martial Arts Like Never Before on Andflix