Sisters of the Valley’s Sister Maria Arrives from New

by GlobeNewswire
in Entertainment
247 6
0 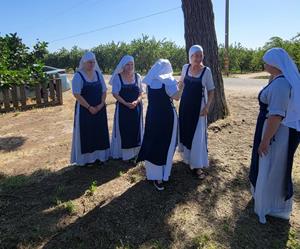 Merced, California, May 19, 2022 (GLOBE NEWSWIRE) — Sister Maria (Kwan Wong) came to America from her homeland of New Zealand several times in the early years of the Sisterhood.  She worked with the Sisters of the Valley in California and learned to make the medicine.  It was her intention to grown an enclave of her own in New Zealand.

She began making a line of hemp products similar to the mother-farm’s, but with the special healing root kawakawa.  She was very successful, and then the people of New Zealand voted against decriminalization and included non-psychoactive hemp in this silly, age-old, tired attack on plant freedom.

At the same time, back in California, Sister Kate was having her own challenges as the pandemic lock-down had sisters fleeing to be with older or immune-system challenged family members.  Said Sister Kate on the subject, “When the SBA gave us funds to help with payroll, we called everyone back from unemployment.  When that happened, the last remaining elder Sister stole a car and ran away and we still don’t know where she is.”

With things falling apart in New Zealand and things falling apart in California, the Sisters decided to consolidate their efforts.   A New York law firm was hired to get Sister Maria here on a three-year work permit.  That was in August of 2020.  Eighteen months later, the Sisters received the green light from US Customs and Immigration to bring Sister Maria to America to work.

“Going through this process has been a real learning experience,” said Sister Kate.  “It took eighteen months to get approval, and that’s with an expensive law firm doing all the work, and now, she still actually can’t begin work until September because the consulate in New Zealand won’t see her to stamp her book and make it official until the end of August.  The system is making sure that a process that should take not more than six months from beginning to end, actually takes twenty-four months.”

The Sisters had a northern California enclave run by Sister Sophia that served wholesale customers from late 2018 to early 2021, but in January of last year, that operation was folded into the Merced mother-farm operations.  These were a few of the many steps taken to mitigate the economic devastation of the pandemic and navigate the legal restrictions happening internationally that greatly contributed to the decline in sales.