by GlobeNewswire
in Entertainment
250 3
0 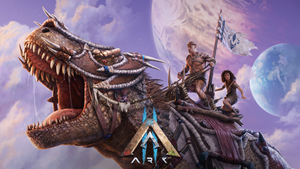 ARK: Survival Evolved Now Free-To-Own on Steam
Head to Steam where ARK: Survival Evolved is free-to-permanently-own for anyone who claims the game before 10 am PDT on June 19! This is a limited-time offer, so aspiring survivalists should get it now to join the adventure!

ARK Nintendo Switch Ultimate Survivor Edition to Feature Star Voice Talent
Launching in September 2022, ARK: Ultimate Survivor Edition has new story cutscenes bookending each ARK map, featuring actors Madeleine Madden (The Wheel of Time) and David Tennant (Doctor Who) reprising their respective roles as Helena Walker and Sir Edmund Rockwell. All of Helena’s and Rockwell’s Dossiers and Explorer Notes will also be voiced by the actors, as will survivors’ epic confrontation versus Rockwell on ARK Aberration. Madden will also voice the cheery robot-AI guide HLN-A in the “Young Explorers Mode” that will lead players through ARK in a low-pressure, kid-friendly, dino-fact-filled adventure.

Existing owners of ARK: Survival Evolved on Switch will receive a free update to the game with all progress and Save data maintained. Tune in at 4:30pm EDT, Monday, June 13, to /twitchgaming livestream to see the first gameplay of ARK: Ultimate Survivor Edition on Switch.

ARK Development & Grove Street Games Partnership:
Studio Wildcard has teamed-up with Grove Street Games to co-develop ARK 2 and for Grove Street to rewrite the ARK Nintendo Switch code with a full revamp of gameplay functionality, graphics, and optimization. Furthermore, Thomas Williamson, Director of Grove Street, will be Development Director and Technical Director of ARK 2 with cross sections of the Grove Street Games team also joining ARK 2’s production in a development partnership. Co-founders of Studio Wildcard, Jeremy Stieglitz and Jesse Rapczak, will balance time between games and the transmedia expansion of the ARK franchise, with Stieglitz focusing creative efforts on the TV series and other initiatives, whilst continuing to serve as Executive Producer of ARK 2. Rapczak will continue as Creative Director of ARK 2 and co-creator of the TV series.

“Thomas Williamson is one of the greatest designer-programmers and technical visionaries working in the games industry today. I am beyond-thrilled that he and the incredibly talented team at Grove Street Games have opted to go all-in on partnering up to build the next iterations of the ARK franchise. By combining Grove Street’s amazing capabilities with the brilliant creators at Studio Wildcard, ARK 2 is going to be a mind-blowing experience.” – Jeremy Stieglitz, Co-Creator of ARK and Co-Founder of Studio Wildcard.

“The team at Studio Wildcard includes many of the most passionate game developers in the world. At Grove Street Games, we’re thrilled. We get to work with a group of excellent people that care so much about their fans, franchise, and moving the industry forward. Together, we will combine the unrivaled ARK universe with the best possible game technology, and construct the ultimate survival experience.” – said Thomas Williamson, Director of Grove Street Games.

ABOUT GROVE STREET GAMES
Located in Gainesville, FL, Grove Street Games has been an influential game developer since 2007. They have delighted fans of the world’s greatest games with bold interpretations on new platforms, and have delivered fresh and original games to millions of happy players. They have grown to be a leader in the industry because of their commitment to building incredible and accessible gaming experiences. Their games can be found worldwide across all major gaming devices, including consoles, PC, and mobile. www.grovestreetgames.com

ABOUT mod.io
mod.io is the leading user-generated content (UGC) solution for game studios and publishers. Since its launch in 2019, mod.io has delivered 1.5 million mods for 110 games, to players across PC, PlayStation, Xbox, Nintendo Switch, mobile and VR. mod.io offers an automated, scalable, easy-to-implement platform designed for the studios seeking to harness UGC in their game. The results are long-term player engagement, and a cross-platform pathway to creator economies. Created by the team behind ModDB, mod.io brings more than 20 years of experience to game developers seeking to unlock their community’s creativity.

Photos accompanying this announcement are available at: