by GlobeNewswire
in Uncategorized
245 7
0 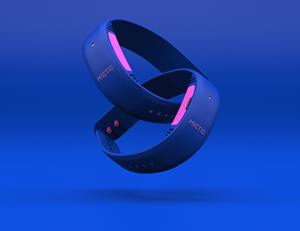 Zurich, Switzerland | Los Angeles, CA, Nov. 02, 2021 (GLOBE NEWSWIRE) — Mictic AG announced it has closed on a new $2.5M round of investment and that its spatial sound wearable will be available to the public on November 26th, 2021. Leading the round are PTK Capital and Moby, the six-time Grammy-winning artist. Serpentine Ventures, based in Zurich, also participated. Mictic consists of two wristbands w/proprietary sensors that map the user’s movements and translate them via bluetooth into music on a smartphone—essentially creating a new category of musical AR without headgear. It’s the musical instrument of the 21st century, endlessly versatile, expandable, metaverse-ready, portable and enjoyable. Watch Mictic in action here.

Mictic allows the user, no matter what their experience level playing music, to immediately play guitar, piano, drums, cello, turntables, and to create music using Mictic’s soundscapes such as Rock, Hip Hop, EDM, Latin and more. It is easy to start using, but also has the capability to challenge seasoned musicians and be incorporated into major stage shows. New instruments and soundscapes will be downloadable monthly. Mictic enlisted the help of the University of Zurich, Applied Sciences to perfect its spatial mapping and the precision of its drum effects. Mictic’s prototypes have been featured by the BBC.

“We’re always interested in technology that brings entertainment and wellness together,” said PTK Capital’s Chief Business Officer, Sharon Kopp. “Mictic empowers people to create their own entertainment with movement—it’s fun, it’s immersive, and it gets people away from staring at screens.”

“Moby has exploded genres by welding the human and the digital together perfectly, changing music forever,” said Mershad Javan, CEO of Mictic AG. “PTK Capital’s emphasis on the human side of innovation is exactly where we want to be. We’ve created Mictic with the same values: How do you use the most advanced spatial mapping technology to give people the ability to create beautiful sounds with their natural movements? We’ve done it, and with their investment we’re able to get these amazing wearables to the public in time for the holidays.”

Moby has launched several businesses including music festivals and vegan restaurants and has also been a major supporter of MoveOn.org, The Humane Society, Farm Sanctuary and Best Friends. He has most recently been in the news for the rave reviews around his 19th studio album Reprise and for the announcement that he’ll executive produce and create music for the documentary Meat the Future (with narration by eco-warrior legend Jane Goodall).

Mictic One will retail for $119 and be available globally beginning on November 26th, 2021. Each unit includes two wristbands, software with 15 sounds and soundscapes, tutorials and a charger. An easter-egg-like bonus unlocks a series of five “game” experiences like tennis, robot and karate when the user makes their Mictic account to receive updates. Preorders can be placed here.

Mictic AG is a fast growing startup founded in Zurich by Rolf Hellat in 2018. The company aspires to develop innovative music experiences, using technology in ways that profoundly change the way how people interact with music.  For more information and to become part of the next musical revolution, go to mictic.com.