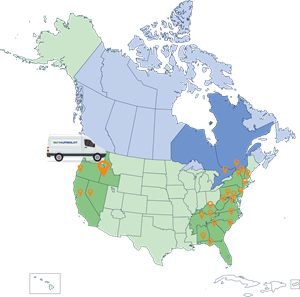 Washington, DC, April 20, 2022 (GLOBE NEWSWIRE) — For nearly 50 years, NatureServe has been the authoritative source for biodiversity data throughout North America. This Earth Month its President and CEO, Dr. Sean T. O’Brien, is showing the world why this matters by highlighting efforts to conserve endangered species across the continent.

NatureServe is the central coordinating organization for a network of over 60 programs throughout North America. Together, NatureServe and the Network of member programs are dedicated to creating, collecting, and analyzing biodiversity information to help manage, protect, restore, and conserve our natural heritage. To better understand local biodiversity conservation across North America, Sean embarked on the NatureServe Network Van Tour: an expedition that highlights how data are used to sustain biodiversity through technology, science, collaboration, and local expertise.

Traveling in a campervan named Van Humboldt (in homage to naturalist and explorer Alexander von Humboldt), Sean is journeying to natural heritage programs and conservation data centres throughout the United States and Canada. Van Humboldt is bringing Sean to key ecosystems that support rare and threatened species and to the scientists who study them. The tour provides a unique opportunity to evaluate the relationships between people and the natural environment, and connect science with stories about biodiversity conservation throughout North America. To date, Sean visited 23 member programs across 20 U.S. states and two Canadian provinces. The current leg of the tour includes visits to 12 U.S. states and three Canadian provinces.

“Connected habitats support resilience of wildlife. In the face of a changing environment, connectivity within the NatureServe Network encourages the sharing of ideas and information that results in better science and better outcomes for nature,” stated Dr. O’Brien.

Sean is joining experts in the field from the NatureServe Network and its partners to look for examples of imperiled species living in diverse ecosystems around the country and the efforts underway to protect them. The NatureServe Network engages with community groups and conservation organizations, as well as state and federal partners, to develop actionable and effective plans for conservation. For example, the Oregon Biodiversity Information Center works with community volunteers and the United States Forest Service to manage habitat for snowy plover, a globally imperiled species; while the California Natural Diversity Database works with The Nature Conservancy, the Bureau of Land Management, Trout Unlimited, and many other state and municipal agencies to jointly manage a large area of the Central Valley for conservation of imperiled species and habitats.

Despite many challenges to conserving biodiversity, the Van Tour is documenting examples of how data collected by the NatureServe Network is used to help prioritize which plants, animals, and ecosystems to protect. For instance, Network scientists showed how data facilitate conservation of areas that support globally imperiled species, such as the curly grass fern in New Jersey and the alligator snapping turtle in Alabama. They highlighted examples of species that are endemic to certain areas (that is, they occur nowhere else on Earth), including Venus’ flytrap and persistent trillium. Sean was also introduced to several species that were only recently discovered and are considered new to science, including a tassel rue in Tennessee and the sicklefin redhorse fish in Georgia.

“On the Van Tour, I have witnessed firsthand the passion and dedication with which each program works,” said Dr. O’Brien. “I am constantly impressed by the optimism expressed by the field scientists and conservation professionals who work daily with some of the most imperiled species on the planet but remain hopeful for the future of conservation and the perseverance of biodiversity.”

You can follow the journey of the NatureServe Network Van Tour by visiting its home page, which is linked to an ongoing blog and a summary video of the tour.