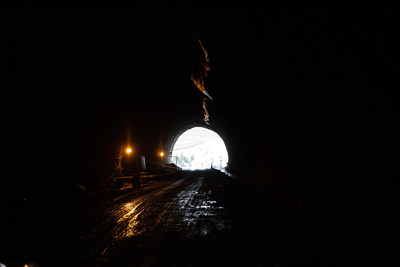 SRINAGAR and HYDERABAD, India, March 28, 2022 /PRNewswire/ — Multisector conglomerate Megha Engineering and Infrastructures Ltd has completed the halfway mark in the excavation works of Zojila Tunnel in the Himalayan range, amid adverse weather conditions, including blizzards and constant snowfall. This feat could be achieved in the shortest possible time.

The MEIL has carved a niche for itself by boring a tunnel in the mighty Himalayas, a first of its kind in such a geographical zone, which provides year-long connectivity between Srinagar and Ladakh under all weather conditions. This is Asia’s longest bi-directional tunnel and brings down distance and also commute time between the two regions. The commute time between Sonamarg and Meenamarg is presently four hours, while it drastically comes down to just 40 minutes.

The MEIL is executing the project for the National Highways and Infrastructure Development Corporation Limited (NHIDCL), a Ministry of Road Transport and Highways undertaking. The Zojila works were launched earlier by Transport and Roadways Minister, Nitin Gadkari.

It is a strategic connection between Srinagar and Leh. This part of the Silk Route is most crucial for Defence as well as economy of the region. This is a key project that will contribute to the integrated development of the Jammu & Kashmir and Ladakh regions.

The company has carried out the works in sub-zero temperatures, especially at minus 40 degrees Celsius, in high altitude. It is, in fact, difficult to execute drilling and civil works in that terrain which has hard rocks and heavy seepage. But, the MEIL, which is synonymous to early completion of projects, is executing the works with diligence.

The tunnel excavation works are completed to an extent of almost half the length – seven kms or 7,000 metres — as of now. The project has four bridges with a total length of 815 metres to cross the river on the Zojila route. The substructures and foundations for the bridges are completed.

Mr. Harpal Singh, Project Head, said: “We have achieved what the entire nation thought was impossible. While everyone around Meenamarg, including army personnel, police, medical personnel and locals have left the place due to very low temperatures during winter, the dedicated workforce of the MEIL stayed on and continued the tunnel excavation works. Everyone is elated with the progress of the work.”

He further added that the works on the tunnel were progressing at a very slow pace of less than 15 metres in about two years, before the MEIL took it over. “After the MEIL has taken over, it has completed 7 km of excavation works in just a year and a half. Even during peak winter, around 3.5 kms of excavation work has been completed,” said Mr. Harpal Singh. He said that teams from premier institutions like the IIT-Delhi and IIT-Srinagar visited the works on the project and expressed happiness over the international standards maintained in the execution.

Recalling an incident, Mr Singh said: “On October 24, 2021, as many as 16 government employees and 24 policemen got stuck 3 km in snow at the yatra starting point. Within half an hour, the MEIL staff reached the point, cleared the snow, offered food to those stranded and rescued everyone.”

He added that the excavated tunnels became hibernation centres for black deers and other animals.

The MEIL is also laying a 17-km-long road from Z-morh to Baltal. It has completed 40 percent of the road works. Laying of a road in the hilly and snowy terrains includes different processes and layers compared to normal planes and plateaus. Those processes and layers include path-clearing & grubbing works, earth work excavation, embankment, formation of subgrade, polystyrene sheet & CTSB layer, CTB layer, etc.

The company has deployed a total of 1,268 advanced and high-end technology machinery and equipment for the execution of Zojila project. The manpower involved in the project is 2,000 persons, and many other indirect employment opportunities to people.

The MEIL began its journey with a small fabrication unit started in 1989. It rose from local to a global corporation with its projects and activities spread across multiple sectors. It has made its mark in across 20 countries in the last three decades. The company operates in Irrigation, Oil and Gas, Transportation, Power, Telecom, and Defence sectors. The infra giant has to its credit the completion of the world’s largest multi-stage Kaleshwaram Lift Irrigation Project in Telangana.